It’s been a long time since I last posted. Life sometimes encroaches on gardening, I’ve discovered.

I’m happy to report that we’ve had a lot of success growing a lot of delicious vegetables here in our Saint Augustine suburban side yards and back yards. That said, some vegetables just failed, despite how much we wanted them to thrive.

Here’s the list of what produced extremely well here near the beach, and what those who live nearby might want to skip in favor of better-suited varieties.

Cow horn okra (got it from Ace Hardware right near Walmart): Grows huge pods; pick before they’re too big or they get woody and splinter when you try to cut them into medallions.

Burgundy Okra (from seed): Velvety red pods that turn green when you cook them. Some true Southern gardeners will probably throw tomatoes at me when I say this, but: I can’t tell any difference in taste between this and the cow horn okra. 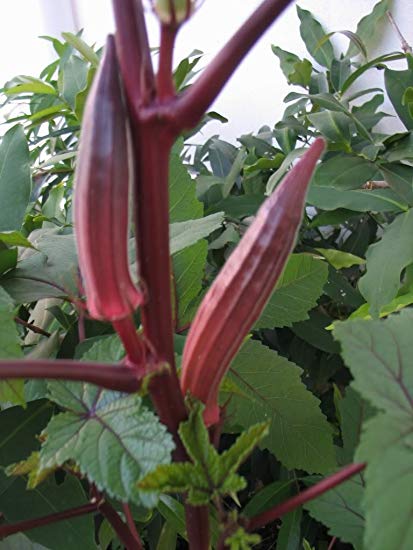 Zipper Cream Southern peas (i.e. Southern cream cowpeas, grown from seed): Thanks to my father-in-law for showing me just how delicious these can be. He grows these things and shells them in heaps and they are delicious. We were very successful in growing some of our own at the Northeast corner of our home. They are delicious when cooked with some sliced okra in water with a little bacon, ham, or a fancier broth.

Green onions (bought at Curries Market on U.S. 1 or Moultrie Square Publix, can’t remember which): This was probably the best cheapskate tip I’ve every gotten. I bought a bundle of spring onions/green onions, chopped off the greens and left the bulb and roots, then planted the roots. The roots continually sprout new green tops when the tops are cut off. I haven’t had to buy any spring onions for almost a year.

They appear to grow year-round if you cover them with a Planket (Home Depot on U.S. 1) when it’s due to freeze. 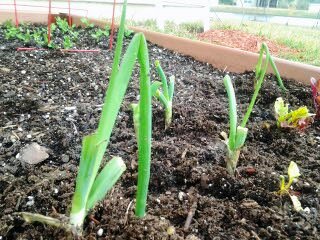 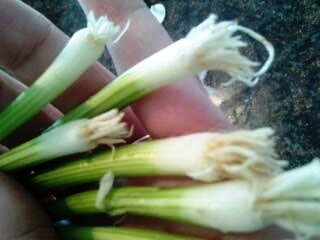 Sugar Sprint Peas (grown from seed): These vines produces masses of sweet sugar-snap peas. They’re vulnerable to high heat, so you can’t grow them in summer, but they last well in the winter if you use the Planket.

Carnival carrots (grown from seed): The brightly-colored roots came up in shades of purple, yellow, orange and white. We grew them in a container and in the ground and they did much better in the ground despite how big the container was (as judged by size at maturity). The purple and orange ones were sweet and the yellow ones less so. The white ones were tough and tasteless and, unfortunately, they outnumbered the other colors 2-to-1. Will try a different variety next time even though these did very well here.

Buttercrunch and splashy troutback lettuces, arugula and endive (bought plants from Ace): All of these did wonderfully here in fall and winter. We grew them in containers and brought the containers in when it got too cold.

Spinach mustard (grown from seed): I bought the seeds for this as part of a 3-for-a-dollar deal at Dollar General. So far, the seeds I have bought this way have done as well or better as all the fancy organic and premium seeds I’ve bought online or other places. The plants produced in profusion and even self-sowed, so that after all the spinach mustard was harvested, another crop started to come up without our help 2-3 months later. This tastes really good, too, and we use it in any recipe that calls for spinach or greens.

Butternut squash (‘volunteer’ from the compost pile): So, we love butternut squash and make it into gratins, purees, soups, stews, etc. We also try to put the scraps from our vegetables back into the soil to turn into compost. This resulted into a beautiful butternut squash plant that actually produced well into the summer. From what I understand, it’s supposed to be a winter squash. We only got two full-fledged butternuts, though; the other baby squashes rotted before they reached maturity.

“Mystery” squash (another volunteer): We propagated this the same way as above, with even better results. We’re still not sure what kind of squash this was; the squashes were round and tasty, kind of like a buttercup squash without the “cap.” We got a lot of squash from this one.

Pickling cucumbers (plants from Ace): We bought the same variety from two different Ace locations. The ones from the Ace on U.S. 1 south were in poor condition and, unsurprisingly, produced poorly. The ones from the Anastasia Island Ace were in great shape and gave us plenty of cucumbers to pickle. The pickles were extremely popular with our families and friends.

Cilantro and dill (bought as plants from Moultrie Square Publix): These thrived on the sill of my east-facing window. I had to bring the first cilantro plant back to Publix because it died in three days. The produce manager told me he had never had success growing any of these herbs. I ignored his advice and grew two beautiful, healthy plants that prospered and produced enough leaves from salsa to last a season and enough dried dill to last longer than that.

Garden thyme and lemon thyme (bought as plants from Ace): I planted these together and set them on my porch, where they did beautifully. The heat killed the garden thyme but the lemon thyme is still doing well. These two plants provided enough dried and fresh thyme for at least a year.

Pineapple sage and holy purple basil (bought as plants from Ace on U.S. 1): Both are thriving. Eventually, they had to be transplanted, where they quadrupled in size on the east side of the house. They prefer to stay a little dry, I found.

Sweet basil (bought as plants online): I bought several of these because my husband loves pesto. They’ve done wonderfully as long as they’re not over watered and have provided much pesto. I keep pinching off the forming seeds in order to prolong their lives. The stinkbugs love them, though, so I’ve been forced to use organic pesticidal soap in order to control them.

Not only do stink bugs stink, they are thorny if your fingers inadvertently come across them. Yuck.

Burgundy okra (in the wrong place, i.e. west side of the house); this does very well on the southeast side.

Fruit trees (bought online): As nice as online retailer are, I have yet to have a tree or fruit plant I bought online be successful. Maybe it’s the transplant shock, or maybe it’s ignorance of how to care for them. My tropical snow peach, Florida prince peach, turkey fig, muscadine grapes and manzanilla olive trees were all fails.

Heirloom tomato mix (grown from seed and bought as plants online): As enticing as the rainbow-colored heirloom mix was, it failed. I grew two dozen Beefsteak, Brandywine, etc. tomatoes from seed, and they all died in a late frost. I planted the same from plants bought online (bad idea, folks; this has never worked) and they grew long and leggy but gave almost no fruit and succumbed easily to pests and disease.

This was a major disappointment; we ended up buying our tomatoes from Curries Market, County Line vegetable stand in Elkton and Moultrie Square Publix rather than eating home grown.

3 thoughts on “Update: What worked, what didn’t.”