In Northeast Florida, ‘heirloom tomatoes’ and ‘growing midsummer’ don’t usually mix.  Henry Flagler knows, I’ve had my share of failure growing heirloom tomatoes in this heat (see the blog post here). So, I’m getting my tomato fix by starting this fall’s crop in a sunny room inside. I’ve chosen an eclectic mix – everything from ‘atomic’ grape tomatoes that look like they fell in a tie-die washtub to a native Florida species directly related to the ancient ancestor of the modern tomato. True tomatophiles will enjoy the linked article, which gives a sweet pop of ancient history about the ancestor of our beloved modern tomatoes.

What I’m growing in the depths of summer (below). To have us grow some seedlings for your garden, click here.

I just began these for transplant in August. I’ll keep you posted (UPDATE HERE) about the progress of each one.  If they’re successful, I’ll go more into depth about what makes each of these unique.

Here’s a look at the packets. Note: Black Cherry was developed in Florida by a Floridian. It’s highly recommended by the University of Florida’s agricultural extension here in Northeast Florida. We’ll see if it lives up to the hype. IFAS also recommend Mortgage Lifter, which has a cool backstory I’ll post about later, as well as Green Zebra.

All of the tomatoes I’m currently cultivating are heirlooms, though heirlooms have their well-respected and credentialed detractors.

While those of us who love the history and challenge of heirlooms see hybrids as this:

But heirlooms, like any other celebrities, do have their haters, and, the argument against  goes something like this: Heirloom tomatoes were mostly developed in the 1940s, after the Great Depression, and are the result of vegetable breeding. Humans have been selectively breeding vegetables for thousands of years, ever since the agricultural revolution. The result is today’s ears of giant corn compared to the tiny ancestral cobs of maize, and tomatoes hundreds to thousands of times the size of the original pea-sized tomato ancestor. How is continuing to breed new varieties any different?

I fall somewhere in between the two arguments. Heirlooms are hard to grow because of their low disease resistance, but they taste so much better than grocery store varieties. Even the hybrid Celebrity tomato, which IFAS praises as one of the best varieties for tough, hot, humid Florida gardens, doesn’t taste that much better fresh than what I buy at the store. Many of them are the result of hundreds or thousands of years of culinary heritage, including one of the varieties below, Radiator Charlie’s Mortgage Lifter, which has been entered into the International Ark of Taste. The organization collects seeds from foods with unique histories, exquisite taste and in danger of dying off the planet completely.

My bottom line, though? If these heirlooms are too hard to grow, I’ll switch until I find exactly what I’m looking for, even if – by Monsanto!- hybrids produce better fruit! I’ll share the results with you, but in the meantime, the fate of this enterprise rests in the tendrils of: 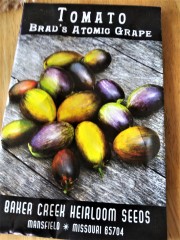 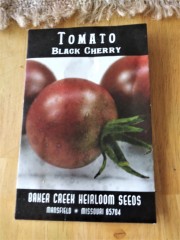 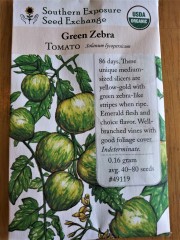 3 thoughts on “I’ll grow heirloom ‘maters despite the haters, by Monsanto!”